Welcome back, my Doggists!

Today’s post is going to be a little controversial, and though I thought it wouldn’t be necessary to write about it on my blog since there are numerous articles that debunk the dominance theory, I realised it is still very necessary:

So I’ve got motivated! It is my duty to share this information with you and I’ll try to make it as easy and light as possible 😉

Why humans are seduced by the idea of dominate their dogs? Why do they need to feel superior? (The man has always been classist in society) Why the desire for absolute control? Power? 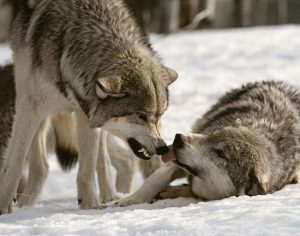 In animal behaviour being “dominant” refers to establish a rank / status through force and aggression to have priority access to resources (food, opposite sex, places, etc.) So why many trainers and owners still believe that using these techniques based on force and intimidation to be the “alpha” is the right way to train your dogs?

People have interpreted the concept of dominance at their convenience, basing it on having power, other than to establish a range and exercise control force; misinterpreting the canine relationships and social hierarchies, in addition to teaching how to try to manage and train dogs (incorrectly).

Here I show some of the atrocities that all dog trainers we often hear, unfortunately not from just people in general, but from brainwashed owners by outdated trainers. Hopefully most of you will find these phrases as illogical as me, but if not just know that these are MYTHS:

Science has shown us several times (see references at the end of the post) that forcing submission in no way represents how animals, including dogs, establish relationships between them or us.

Let’s see it with a totally outdated concept: the alpha. “Alpha” implies compete with others or reach the highest rank winning a fight. However, most wolves that lead their pack have achieved their position / rank just mating and producing puppies, which eventually come to constitute their pack. So they are just the parents, and this is how now they are called: the “breeding male“, the “breeding female“, or mother, female adult, or parent, adult male, etc. But the term alpha is misused, as admits in this short video David Mech, one of the biologists that has published most about wolves and who was one of the creators of the dominance theory.

This confusion is because studies, in which all these trainers promote dominance, like the famous Cesar Millan or Borja Capponi, were made based on captive wolves, which means that packs were formed by wolves from various sources and then the family structure is broken, so conflicts arise because can’t be solved naturally.

Wolves in natural conditions show very few aggressive behaviours towards members of their own pack. Moreover, the postures of submission are never enforced by the most “dominant” animal but are taken naturally and voluntarily. (So I support with science common sense: don’t even think of throwing the dog down or forcing these rare positions seen in famous TV shows…) 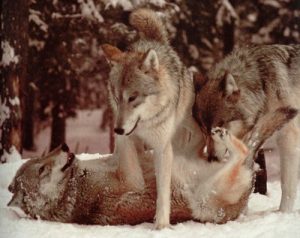 In natural conditions animals who often relate to brute force (or so called “bullies”) end up being eliminated by natural selection. That kind of behaviour requires too much energy for the animal and runs the risk of being injured, killed or plundered during the dispute.

Makes sense. Cooperation and group cohesion are much more important for the survival of the herd that aggression and confrontation.

Therefore, the hierarchy is taken into account as a family, it is a parent-child relationship, not imposed. Demonstrating that there may be hierarchy without aggressiveness or without dominance. Moreover, often the so-called “alpha” is precisely the less aggressive because it has no need to be.

The error of all this confusion was to extrapolate the observation of packs in captivity to domestic dogs.

This has led to think that treating dominance is the key to solving almost all behaviour problems and nothing is further from reality! The techniques used to solve problems related to dominance behaviours involve punishment, intimidation and fear. Just the opposite of what they need to overcome the problem.

In addition, trying to apply the same concept to everything is absurd. Believing that all dogs are the same is like saying that all people are too. That’s why our education system itself is endangered! because it does not address the ways in which children learn and some children become discouraged and drop out of school because their needs are not covered.

Dogs can not leave the system, but they can be discouraged too. Dogs become depressed (Hello? This happens more often than you imagine) when they are in a state of learned helplessness, in other words, dogs who have surrendered.

Dominance and leadership are different concepts. You do not have to dominate your dog to train him. You have to be the guide, the secure base, giving him confidence, not removing it. That’s how they learn best!

Share so that more people have a good bond with their dog.

For a relationship based on respect and trust! 🙂

Outmoded notion of the alpha wolf by David Mech

Alpha Status, Dominance, and Division of Labor in Wolf Packs by David Mech

Down With Dominance by Patricia McConnell

Dominance in Domestic Dogs: A Quantitative Analysis of Its Behavioural Measures

Perspectives on domestication: the history of our relationship with man’s best friend

The Dominance Controversy by Sophia Yin

Dog Training and the Myth of Alpha-Male Dominance